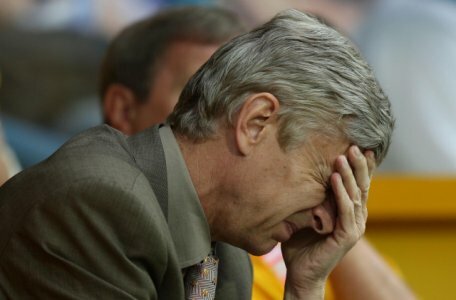 Now lets wait a sec… A few days ago Wenger said ” We were short of numbers at the back and he would be looking at signing one more defender” and that was BEFORE Sol Campbell joined Newcastle?

So why has Wenger now changed his tune? ….. I have no doubt that our transfer dealings are now done… But maybe Wenger will push the boat out and resign Silvestre for 2 more years?

Wenger will tell the fans that he will be up until midnight on deadline day working hard to bring in new faces. but come midnight we are going to be left waiting.. and nothing.

Now hang on, Arsene’s attempts to resolve the defensive problem have been going on for several seasons now.

Based on his efforts to date to fix this massive weakness in the team, which has I conclude that Arsene is a massive, massive flop.

We have allowed FOUR CBs to leave this summer for FREE and replaced them with an unknown CB with the physique of Marc Randall.

And what if Vermaelen picks up an Injury during the season??

And what about the Keeper? Who is going to be our number ONE?? And the backup DM for Song?.. I pray its not Denilson or Diaby being asked to do the dirty work when Song picks up his 10 yellow card of the season.. Or maybe Wenger will use Nasri again? …Oh god please Arsene stop being a tight sod and go and sign Kompany who can do both jobs.

Worried yet? …..You should be, But in Arsene we trust right?

This is much of the same over the last four summers, Wenger hinting that he would invested and then backtracking and letting us down? …Where is all this money that we apparently have?

I tell you something, If we go into the season with our current squad we are going to be lucky to finish in the top FIVE!!

And then what?… What will the “in Arsene we trust brigade” do then?… Blame the board? Blame the players? Blame the pitches? Blame the refs? Blame the other team for being to hard?….No we did all of them already since 2005.

No doubt this is going to have the “AKB” calling for me to go and support the scum down the road, or pick out the odd spelling mistake to take the attention away from from the facts… But it time some of you so called Arsenal fans smelt the coffee.

We need a manager who cares more about making a profit and balancing the book. I hope this summer is his last as our manager.

Sinbad – Part of the “Wenger Out“ group on facebook

Debate this more on our forum > www.arsenalaction.com/forum/