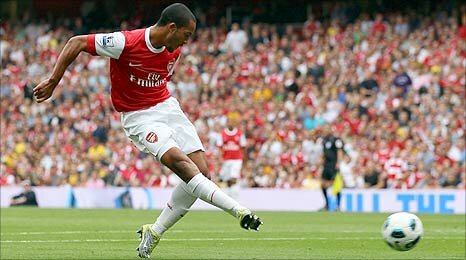 Theo Walcott showed he has the potential to be a great player but he has to do it more consistently.

Song 7.0
Although was against poor opposition, showed good strength and impressive composure in defence.

Clichy 7.0
Defended well and was his usual strong attacking self.

Diaby 6.5
Good goal but gave away some cheap possession in the 1st half.

Wilshere 6.5
Tried hard but nothing to shout about. Still, showed that he can slot into the team when needed to.

Rosicky 8.0
Our best player besides Walcott. His movement and passing was excellent.

Arshavin 6.5
Aside from the penalty and the assist for Walcott’s 1st goal, did not seem to be that much of a threat. Looked off the pace at times.

Chamakh 6.5
Deserved his goal and I thought was involved in alot of our good passing. Missed a few simple chances, was move out wide when RVP came on. I hope thats not were Wenger will play him

Walcott 9.0
Good finishes and was a threat all afternoon. Showed he can turn it on against the weaker teams, but just got to do it more consistently and especially against the bigger teams. [MOTM]

Subs
Fabregas 6
Good game to get some minutes. Lots of running and good linkup play.

Van Persie 6
Still not fully match fit and was afraid he could have been injured anytime.

Vela 6.5
Showed glimpses of brilliance but needs to contribute more when called upon.