Home / Arsenal News / Wenger’s goalkeeping insanity goes on and on….

Wenger’s goalkeeping insanity goes on and on…. 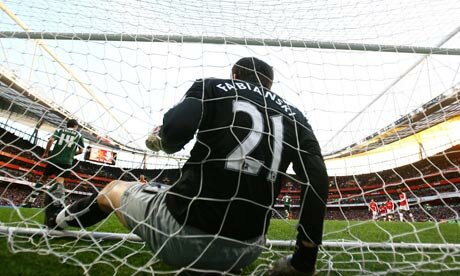 There’s only so long a young player can keep their heads down and their mouths shut as week in and week out they see tripe selected ahead of them. That breaking point has been reached by Szczesny; the player widely regarded as the future of goalkeeping at Arsenal Football Club.

And it’s understandable, really. Last season he was playing regular football, the first choice goalkeeper for Brentford. Now I’m not going to lie to you and say I watched even one Brentford game last season, but by all accounts, he was nothing short of phenomenal.

Which makes this whole situation even more difficult to understand. Here we have a player, not ridiculously younger than Fabianski himself and lauded as a future great for the club, playing second, no wait, third fiddle to inarguably the worst first or second choice goalkeeper in the Premier League. Szczesny seems absolutely thirsting to prove himself; he is full of confidence, command and ability. Yet game after game after game after game (I’m not sure how many games need to be included to emphasise how long this has been going on now) Fabianski the F**k-Up is continually picked to play for us. Fabianski is an embarrassment to not just Arsenal, but every goalkeeper that has ever played for this club. What’s more of an embarrassment is that our manager still is determined to pick him. [i]“I am personally convinced he is a world-class goalkeeper, potentially,”[/i] Wenger said about Fabianski prior to the Carling Cup game against Spurs, and of course, prior to yet another high-profile error by Fabianski that could have been, in other circumstances, highly costly.

Hold on for a second. Are we all watching the same player Wenger is? This is bordering on delusional. The guy is a train-wreck and a farce – we are the laughing stock of the Premier League for our goalkeepers, but even for Almunia’s shortcomings, he is thrice the player of Fabianski. And to think we’re only one sprained wrist or one broken finger from having Fabianski as our first choice goalkeeper (which, I might add, is his ambition – to take over for Almunia.)

Does that not make you all disgustingly angry? I know it does me. Fabianski…FABIANSKI is tipped to be the next thing in our goal, and we know it’s only a matter of time before Almunia gets his yearly bout of SARS.

But more aggravating than the almost unbelievable fact that Fabianski even has his name on the playing staff roster at a club like AFC is the fact that his presence, or more to the point, Wenger’s insistence on supporting this failed experiment, is keeping a guy like Szczesny out; a driven, talented and confident young goalkeeper.

I browsed a few Spurs forums in the build up to the CC game and one thing stood out – the sheer jubilation and the news that Fabianski would be in goal for us. Can you believe that? Opposing clubs are genuinely pleased to see this player take the field. They lick their lips at it. What a f**king slur that is on this club as a whole. An opposing club should never be pleased to play against your players, let alone holding out for one of them to take the field. Teams go in against Fabianski knowing they have at least one or two goals in the bag, so long as they poke the ball at him.

I’m sorry but this club isn’t charity act. It’s great to see players develop and make something of themselves but when it doesn’t come off we can’t go on forever giving them chance after chance. Fabianski has blown chance after chance and it has cost us; how many chances did Senderos get, for that matter?

Wojciech is fed up with it and so am I, and so are you, I imagine. If we lose this young goalkeeper on the back of Wenger’s absurd misplaced stubbornness, it will be appalling. But know doubt we will, Szczesny has questioned Arsene Wenger and to do so means death (of one’s career. Wenger doesn’t yet have the power to put a player who questions his methods to death but no doubt it’s something he’s been putting to the Board for a while now.)

Because that’s what it is and so often is; a matter of a clash of ego’s. It’s being reported that Wenger has a problem with Szczesny on a character level. That’s is, a clash of personalities. He’s even ignoring efforts by the young Pole to negotiate a new contract, which I might add, is up in June. [i]“I had three meetings regarding extending my contract but the club seemed not to be interested.”[/i] Isn’t that great to hear for all of us who had believed this guy was being nurtured to be the next best thing at Arsenal? Nope, instead we get Fabianski. Unbelievable.

I don’t think there’s a manager in this league, perhaps not in any top league in the world, that would stick with Fabianski, especially not at the expense of another much more promising young player. And you know it won’t end until Wenger finally gives up the ghost and leaves.

“I am ready to play at a high level and need a club which won’t be afraid to rely on a 20-year-old goalkeeper.

“At Arsenal, nobody is brave enough to do so. It won’t be difficult to find a new club but I am not allowed to speak to anyone.

“I know Arsenal are fighting for trophies but if you want to win anything you must play your best players – not the oldest ones.

“I am trying to fight for the No 1 shirt. I am not interested in being No 3 at any club.

“My contract’s running until June.

“On January 1 I will be able to sign with any other club so I won’t say now that I want to leave because I could fall into trouble.

“I’d love to play for Arsenal but am expecting more than a few words (from Wenger) at a Press conference that, one day Wojciech will be the No 1.”

I know the rest of you are as sick and tired of Wenger picking Fabianski as I am, and of Wenger picking Almunia. It’s not the players’ fault if they are picked, but this stubbornness by Wenger is far beyond insanity. Can you imagine what Ferguson is thinking? What Ancelotti is thinking? They’ll be laughing at us, just like most other clubs are. Don’t we have a top manager? How can somebody be so right, so clever, and so meticulous in some regards, but so stubborn and just plain idiotic in others.

Fabianski isn’t an accident waiting to happen. He’s the accident that has happened, and is happening again and again and again, but every one of us except Wenger can see it. And just when we thought that we knew the limits of the damage that Fabianski could do to this club, we find he is frustrating our gem of a keeper to the point of leaving. You can understand where this frustration comes from; everyone of us will know the feeling of having somebody above you who you are better than, be it at work, school, a sports team, or in your own families perhaps, and the feeling of seeing that person rewarded for talent they never show, while your left unable to prove yourself.

All Szczesny wants to do is show his fans, and show our opponents just how good he is; could there be a greater quality in a player? It’s an ambition that Fabianski has never shown. So just how the hell is it getting ignored?