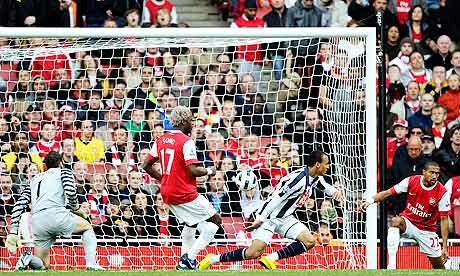 A shambolic performance by the team saw us devastatingly come away empty-handed from tonight’s home-game.

The team were obviously lacklustre following the midweek fixture that went to extra time, but the performance in this match was inexcusable. Make no mistake, on a day where Chelsea dropped three points, this is a devastating result, and sets our campaign on a dangerous route; a draw to Sunderland followed by this defeat, with difficult games to come including Chelsea at the Bridge.

The game never really started for Arsenal, with sprightly moments few and far between. West Brom stamped their authority on the match earlier on and in all honesty was dictating the tempo to us. At times it was difficult to believe that we were Arsenal and they were West Brom, so significantly were they outplaying us with the sort of technical passing and movement which we are accustomed to delivering. Arshavin hit the post early on but other than that, woeful shooting and wasteful set-pieces (how often have we heard that before?), as well as impotence in our movement and penetration always meant we struggled to make any sort of mark on the game.

On the contrary, West Brom was absolutely clinical and literally ripped our defence to pieces time and time again. It was a frightening thing to watch when one considers the much sterner opposition we are soon to face.

Overall, the complacency and sluggishness of today’s performance was inexcusable. We shouldn’t have to be 2-0 down before we actually decide we want to compete in a game. As has happened against lesser opposition in times gone by, we took the failed and performed as though we were playing a meaningless exhibition match, as if everybody was here to simply watch us play, and that the opposition have no right to even contest the match. Ultimately, we were punished for it, and were poor in every regard. Defensively, particularly, we were in tatters, which is even more depressing given how optimistic fans have been recently about our defence’s ability to compete with opponents like Didier Drogba in particular.

I’m sure Wenger made every effort to focus the players for this game and remind them that the mid-week victory was now meaningless. However, a coach can only do so much, and really I think regardless of tactic and formation, we should have put this one comfortably to bed. Yes the 4-4-2 at the beginning looked out-of-sorts, but this was mostly due to absolute incompetency by our players and passing that was so wasteful it defied belief. In the end, it’s the players that take the pitch, not the manager, and they played like lazy, overpaid sacks of crap. Samir Nasri, who fought right to the end and scored two goals, is the only player that can come out of this with even a scraping of pride.

Of course, there was the perennial issue for which only Wenger is to blame: the goalkeeper. Almunia, whom many including myself had been so hopeful for, and who had appeared recently to have turned his form around, was guilty of several costly mistakes tonight. Firstly, he rashly tripped the West Brom striker in the box, but made amends by saving the penalty. He was, in my opinion, left exposed for the first goal and was not at fault, but for the second he casually let the relatively tame shot through his legs in a terrible display of basic shotstopping. For the third goal, his decision making was appalling; as a goalkeeper, if you you’re going to rush then you have to go all in. Instead, he half-assed to the edge of the area before realising he was going to get there, before being caught way out of position and barely within twenty feet of the final shot. Again we see that this player is not good enough to be a first choice Premier League goalkeeper. He is a second goalkeeper, nothing more. We as fans should not be made to put up with this but our concerns again and again fall upon deaf ears. The fact that we are still arguing this point, and that Wenger has not equipped the club with a keeper to match our ambitions, is beyond criminal.

We lost because we were lazy, had no ambition to win and no drive. Our passing was terrible, and our attacking was totally lost and without purpose. We missed Fabregas more than can be explained; we were headless chickens without him. Chamakh became invisible, so poor was the service. We have nobody to blame but ourselves yet again, for throwing away this game which should have been a certain three points.

Ultimately, it was a disgraceful performance by Arsenal. We were outplayed in every department and West Brom played like ten times the team we looked. Wenger had better work hard to turn the team around this week, and a midweek victory is essential to return any semblance of confidence and pride. Unbelievably gutted, disappointed and ashamed is about all I can say. The 3-2 score line flattered us.

Almunia – 5.5: I thought Almunia was going to have a good game after the penalty save, but he got much worse. Made one good save low to his left, deflecting the shot onto the post. Other than that, he played a large part in the second and third goals, though he really had no defence to speak of.

Sagna – 6.5: Sagna had a lively game offensively and defensively. He worked hard on attack and got himself into dangerous positions, especially when competing at set-pieces. On defence he was typically solid and worked as hard as he could, though he was really caught out on the first goal. If he had had any back up from his other defenders, that error really wouldn’t have been a problem.

Squillaci – 5.5: His poor passing created a lot of problems for us. He gave the ball away a lot and set West Brom on dangerous counter attacks. Other than that I can see little else from his day.
Koscielny – 5.5: Was severely at fault for the second goal. Stood off like a spectator and allowed the West Brom player to have a free shot at goal, which rolled through Almunia’s leg. Was out of position a lot today. Not good enough from either central defenders.

Clichy – 5.5: More use on attack than on defence. Had a few decent crosses in the game but didn’t really come alive until we were 2-0 down and he started getting a lot further forward. I didn’t see any glaring errors but I had my head in my hands a lot. Yet again found wanting in the do-or die defence, and was nowhere to be found for the second goal, when it really was his man to mark.

Diaby – 6: Was taken off early in the second half, looking nowhere near ready to play. He was off the pace and offered nothing to the team, and really just didn’t look up for this game.

Song – 5.5: Much like Diaby, just didn’t affect this game much in a positive way. He was chasing shadows with the West Brom passing. His own passing was quite woeful. Played a very large part in conceding the second goal; if you watch it again he gets beatn DISGUSTINGLY easily and then makes zero effort to track back and make amends. Similar if not worse than Denilson against Rooney last year..He didn’t stamp his authority on this match the way we desperately needed him to. It’s quite appalling that both he and Diaby got rings passed around them by a team such as West Brom.

Nasri – 8: The only redeeming performance in the whole team. Typically wasteful shooting and really didn’t dictate the play the way we needed him to; ie in the Fabregas role/Wilshere role for which he was selected tonight. I think a lot of our problems came from him not controlling the game and cycling through the passes. However, he was one of the few players, perhaps the only player who really dug in deep when we had our backs to the wall. First goal was a very good solo effort, the other a tap in the smelled of offside. Made up for 70 minutes of wasteful shooting.

Arshavin – 6: A generous 6, given that his entire role int he side is to attack well, given that he does no defending. Became invisible after the first half an hour passed. I literally barely remember him being on the pitch in the second half. Almost got a goal early on that would have probably changed the game but really he is not to blame for this loss. He was as bad as all our other attackers.

Eboue – 6: Taken off at the same time as Diaby. He too, having been recovering from an injury, looked off the pace. However, he had a few good moments, notably the superb cross that set up Arshavin at the far post, only for the Russian t prod it against the post.

Chamakh – 6: In my opinion, his worst game in an Arsenal shirt so far. This, I think, was mostly due to the torrid quality of the service to him. Not a single good lofted ball to him in the entire game. Seemed quite knackered really, and I think the pressure of being our only fit centre-forward might be stacking up. Needs a well-earned rest but I don’t think he’ll get it. Also, needs Fabregas back, or at the very least Rosicky or Jack – somebody with vision to actually get the ball to him.

Wilshere – 6: Totally invisible when he came on. Was playing in the holding role which was strange but occasionally drifted out wide left. The damage was doen by the time he came on, and it’s quite worrying that when our backs were against the wall, we had nobody to turn to but little Jack.
Vela – N/A: Barely got on the pitch and could hardly get on the ball