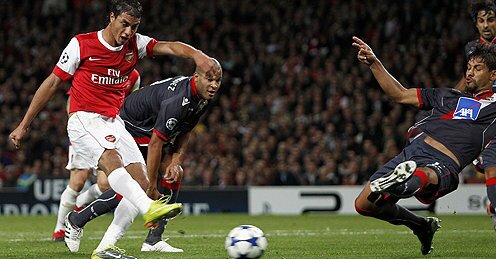 Having now played 10 games in total this season its clear to me that our 3 new signings this summer have without doubt filled the holes of players who have moved on BUT haven’t improved us a great deal.

Let me ask you something, Have the 3 new signings turned us from a top 4 side into a league title winning side?.. Well after losing our last 2 games and only 1pt out of our last 9pt the answer is clearly not.

So whats my opinion on the 3 new signings Laurent Koscielny : Signed for a reported sum of £8.45m, MORE then what Spurs had paid for Rafael van der Vaart. Lets just say that he has had a poor start, Roasted by El Hadji Diouf and with mistakes vs WBA & Bolton and less then impressive last week up against Drogba. its hard to see WHY Arsenal paid so much money for a lightweight CB who has never played at this level and who looks and french 2nd division player. I know people are going to say its his first season in English football and he needs time? Well look at Thomas Vermaelen and the impact he had last season. A player with potential , not exactly a Keown or a Adams is he… Marouane Chamakh : Signed on a free, don’t get me wrong I feel Chamakh has added something to our team and with Wenger wanted to stick with this 4/5/1 a player like Chamakh upfront is perfect. But he is not a Drogba or a player who will score a solo wonder goal. He is nothing more then a decent target man who is good in the air but will miss loads of chances. And as Sunday vs the Chavs showed, in tight games vs very good teams you cant afford to miss chances. Is he the type of player thats going to score 20/30 goals a season? NO! is he better then what he had? YES..A good player but not exactly Henry or Bergkamp. But out of the 3 he has been our best signing this summer Sébastien Squillaci : Signed in a deal worth €4m, a player who can do a job but is clearly not the big powerful CB we needed to deal with the likes of Drogba. Im happy we signed him as we were very short of numbers at the back, but is he the answer? NO. He is a Second choice french player with a long injury record, not exactly a Gallas or a Sol Campbell.

So a summary of our Transfer dealings.. None of these guys are bad players but we are no better then last season??

Whats your views on this?

Debate this more on our forum at www.arsenalaction.com/forum/