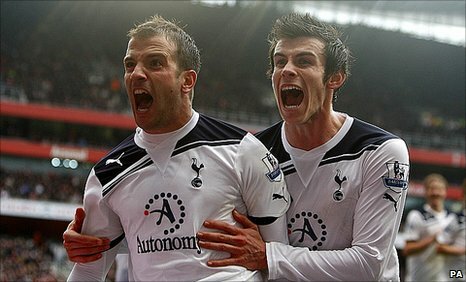 And not for the first time…. Our 3rd home defeat of the season and the most painful.

Why did it hurt so much?

Because we were 2-0 up at half time? No….Because it was the spurs? No…. It was because that most of us have seen this coming. Our manager sticks with this 4-5-1 bollocks when its clear as mud that its not working. Look at Sunderland last wk, Look at Spurs today.. 4-4-2!!! We have not won anything since 2005, about the same time that Wenger started screwing around with our tactics and started caring more about making a profit then winning things.

Today Wenger played 2 DM in Song and Denilson and we still couldnt keep a clean sheet. I ask you what is the point in playing 4-5-1 if we cant win at home?

Today just proved that most of us already knew. We are not good enough, We havent improved on last season and we are going to be very lucky to finish in the top 4…But who cares right? In Wenger we trust, We have £150m in the bank and in 2030 our kids will rule the world…

My Ratings
Fabianski : 6/10 [ Didnt have a chance with any of the goals ]
Sagna : 7/10 [ Played Bale well, But poor with his crossing into the box ]
Koscielny : 5/10 [ Missed an easy header to score.. Gallas was fantastic and our £8m CB was poor again ]
Squillaci : 6/10 [ Didnt do much wrong but he isnt the world class powerful CB we needed ]
Clichy : 7/10 [ Did well, Showed some great pace and linked up well with Arshavin. Played Lennon well ]
Fabregas : 5/10 [ Set up the first goal, Missed an easy chance in the first half. Gave away the pen. Overal poor game]
Nasri : 8/10 [ Scored a fine goal, Been our best player all season]
Denilson : 5/10 [ I cant understand why Wenger plays Denilson and Song in the same side? Poor game, Gave us nothing]
Song : 5/10 [ I lost count how many simple passes he misplaced, Poor game ]
Arshavin : 7/10 [ Played well, Set up the 2nd goal and looked dangerous ]
Chamakh : 3/10 [ Scored the 2nd goal. Didnt have to think about it and just reacted. But not for the first time we have seen him refuse to shot and miss chances that cost us. Today at 2-0 he was clear on goal and didnt shot. Again in the 2nd half? I dont understand why type of striker doesnt want to shot when clear on goal ]

Debate this more on the forum….www.arsenalaction.com/forum/

Ashley Young to Arsenal in January?
Its time for Wenger to do the right thing and walk away…