[Ratings] Nasri,Best player in the world on current form 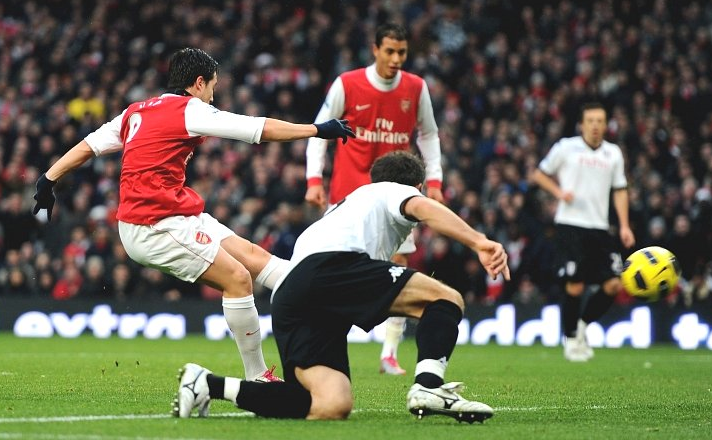 Two flashes of genius from Samir Nasri nudge jittery Arsenal past Fulham in a breathless encounter at the Emirates Stadium.

Fabianski 7.5/10 ( Two VERY good saves from Fabianski today, From Kamara in the first half and in the 88min from Gera, Poor kicking and at times looked uncomfortable but credit to him he saved us when asked to do so)

Sagna 7/10 ( Power down the right, Put in a great cross for Chamakh in the first half. Did well at the back)

Koscielny N/A ( Went down during the Fulham goal and didnt get back to his feet, Apart from that he looked good)
Sub ( Djourou 8/10 : Came on and did VERY well, Powerful in the air and showed some good pace)

Squillaci 6/10 ( Not his best game, stepped up and was playing a risky high line)

Clichy 8/10 ( Played very well today, Loads of pace going forward and was flying up and down the left wing)

Rosicky 6/10 ( Didnt have the best of games, Wasteful with his passing and didnt pull the trigger when clear on goal)
Sub ( Van Persie 7/10 Links the play very well and set up the winner )

Nasri 10/10 ( What can you say about this guy? Been our best player all season . 2 FANTASTIC goals. his first was just amazing but his 2nd was even better. Amazing skills and tight control.. on current form, The best player in the world )

A Song 5/10 ( Kills me to say this but it was like watching the Alex Song that was booed a few years ago. VERY poor today, His passing was all over the place. Gave away countless freekicks and the icing on the cake was when he ballooned when he had 2 free players to pass to )

Wilshere 6/10 ( Keep the ball well, But didnt have a great game. I wish he would have a dig at goal when free on the box rather then always pass to the side) (Walcott N/A Came on and gave us some much needed pace )

Arshavin 7.5/10 (Fine game, Looks back to his best. Set up the first goal and was involved in everything good going forward)

Chamakh 6/10 ( At 1-0 he had a chance 5 yards out with his back to goal and should have turned and hit it, But he went back and lost it. At times he needs to just go for go rather then look for the pass)

Join our forum and debate this and more www.arsenalaction.com/forum/