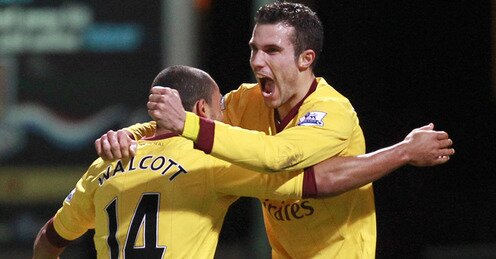 A master class from Robin van Persie who scored twice and set up Theo Walcott, as ruthless Arsenal put the final nail in Avram Grant’s coffin with a 3-0 victory at Upton Park.

Szczesny : 7.5/10 (Made a fine save at 1-0 after a very poor back pass by Johan Djourou, Looked very confidant)

Djourou : 4.5/10 ( His first half was 1 of the worst ive even seen by a pro footballer, This was the old Djourou and not the player who Arsenal Action have given 3 MOTM awards to this season. Looked like he was drunk and was unable to stay on his feet. Much better in the 2nd half but a massive worry)

Nasri : 7.0/10 ( Didn’t have his best game but still looked dangerous. Had a hand in the first goal with a nice step over )

Wilshere : 7.5/10 (Decent game and almost scored with a great hit from outside the box. Overall a tided game)

Van Persie : 9.0/10 ( This is what we have been missing, World class. Linked the play well, scored a fine first goal with his right boot and then stepped up and blasted the pen home. Great to have a fit RVP back and playing well. Lets all hope he can stay injury free now )

Moment of the Match : Arsenal away fans ” You’re getting sack in an hour”