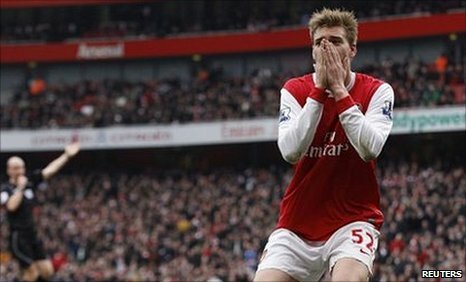 Toothless Arsenal bottle the chance to close the gap on Premier League leaders Manchester United to one point after being held to a goalless draw by resilient Sunderland at the Emirates Stadium.

Szczesny 9.0 [Saved Arsenal with 2 fantastic saves, the 2nd late on from Welbeck was just World Class] Man of the Match

Sagna 6.5 [Same old Sagna, so many decent chances to cross the ball and never put in anything of quality]

Djourou 7.0 [Did ok, at times he mad hard work of the simple things, but overall he played well]

Koscielny 7.0 [After his mistake last wk he was back to his “best”. Just not sure his best is good enough anymore]

Clichy 7.5 [Played very well, put in a few very dangerous balls into the box and was always willing to attack]

Denilson 5.0 [So poor, gave the ball away so many times. Seems to have gone backwards in his development]

Nasri 8.0 [Our most dangerous player, tested the keeper and some fine runs, but got frustrated towards the end]

Diaby 5.5 [Very disappointing, keep the ball far to long and didn’t give it simple]

Arshavin 8.0 [Good game, always looking to attack and was very dangerous at times. Scored a goal that was ruled offside, Replays show he was just onside]

Bendtner 7.5 [ Worked hard and was always willing to test the keeper. Great volley that the Sunderland keeper somehow managed to turn over]

Subs
Rosicky 6.0 [Came on to replace Diaby and did the same job]
Chamakh 5.5 [ Missed our best chance when he headed from 5 yards against the bar, If we want to win the league we have to take them chances and win games like this]

[Team] Ramsey on the bench as Bendtner starts over Chamakh
[Ratings] ZERO attempts on goal? Wengers tactics to blame