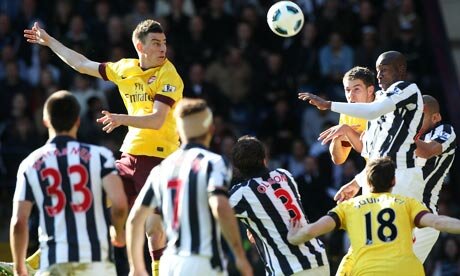 Defence and GK mistakes yet again cost us, and Wenger says “This is the best squad I’ve ever had at Arsenal”….liar or just deluded??

Arsenal will never win anything with players like Denilson and Almunia starting in the team going into a title run in.. But don’t blame them.. Blame the manager for not spending in Jan when he had the chance to push us on.

TBH I am amazed that this team is 2nd in the league. Its sad that we really had a fantastic chance of winning something this season. If only Wenger showed some bollocks and went out and signed 2 players. I’m not talking about £50m players… I’m talking about £20m on two players to push us on and give the club that lift and push us on towards the title…

But at the end of the day Arsenal will finish in the top 4 and Wenger and the board will be happy..Champions league football on budget, Well done Arsene, I hope the board reward you yet again with a massive new contract.

Who gives a f**k about winning things anymore,put the season ticket prices up. Sell our best players and never invest any funds into the club…Arsene you only care about making a profit for the board and that sir is the only reason we have not won ANYTHING in 6 years.

In Arsene we RUST!

Almunia 2.0 (Started the season as our number 1, turns out he is not even good enuff as our number 3..What is he still doing at the club? Simple no other manager things he is good enuff, Wenger should of signed a keeper 3 years ago but has shown faith in this clown and its cost us time and time again. Horrible mistake for the 2nd goal. No reason to come rushing off his line and leave the goal empty)

Sagna 4.0 (Defensively very poor, Everything came down our right and Sagan was nowhere to be seen)

Koscielny 3.0 (All over the place, Booked for kicking out and looked a 2nd div player at best. Schoolboy defending)

Squillaci 2.5 (Wenger trusts him, what a joke. This guy is no better then Senderos, Cygan and Silvestre)

Clichy 7.5 (Very good game, Put in 4 fine balls into the balls and was unlucky not to score late on to win the game)

Denilson 2.5 (By his low standers he was just disgusting)

Wilshere 6.5 (Played well, fantastic when he runs at them into the box)

Ramsey 6.0 (Not an easy time of the season to make your comeback, Unlucky not to score and at fault for the first goal)
Arshavin 8.5 (Our best player, Scored a great goal and set up the 2nd with a great cross to the back post)

Subs: Chamakh, Bendtner (N/A) (Bendtner did well to win the ball for the 2nd goal)