[Ratings] What mental strength are you talking about Arsene? 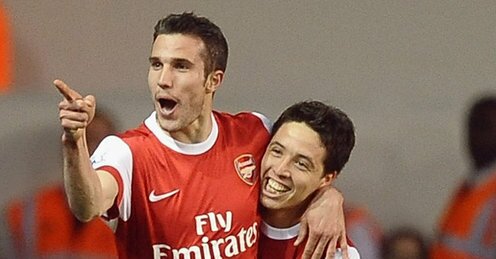 We just knew that at 3-1 we were never going to see the game out!!

And after the game our manager talked about our fantastic mental strength? What the hell is he talking about?.. How many times are we going to drop points from being in the lead by 1 or 2.. NO 4 goals?

If this is a fantastic mental strength then i must be confused… But then again this is coming from a man who puts a 6ft striker on the wings and who started the season with Almunia as our number 1 keeper.

What can I say that ive not said before?

No support for RVP

No discipline by Song

Nobody wants to take a shot at goal

The title race is now over and now we are 3rd, Wenger said he was happy to finish the season 2nd. What type of message is that to send to your players? At this rate if Man City win there game in hand we might even finish the season 4th….

But of course that is a success for Wenger isn’t it.

Roll on the summer. Hope we have a massive clear out and I hope Wenger drops the 4-5-1 come 4-3-3 garbage and get back to seeing Arsenal play with Wingers and 2 strikers.. Like we use to when we were winning things.

Keep us in the game with some decent saves (Sandro, Crouch) in the 2nd half. Was fast off his line and took Bale out in the first half but Lennon was just that little bit to quick for him for the pen. But overall a solid game from the young keeper.

Played Bale well in the first half, but he was ripped apart by Lennon in the 2nd and his poor making on Lennon allowed him to make the run for the pen.

Decent game, didn’t do much wrong. Did well vs Crouch and showed decent pace and good on the ball

Not his best game. Booked for a lung on Modric on the edge of the book and was slicing everything and not clearing his lines.

Picked ahead of Wilshere and played well, was involved in everything and kept things simple. Won a lot of key heads defensively

Looked like he had a point to prove. Set up Theo for the first goal and was at the heart of everything going forward. BUT poor clearance for Huddlestone’s goal and at times I wished he would shot rather then look for the killer pass on the edge of the box

Like Cesc I wished he would shot when outside the box more. After scoring in the first half with a decent 20 yarded you would think he would keep going. But 2 many times in the 2nd half he refused to take on the chance of testing the keeper.

Got us off to a flying start. Took his goal very well and maybe should of scored a 2nd before half time. Again in the 2nd half his pace was key to our counter attacks. Was amazed when he was subbed towards the end.

“Our defensive rock”… Not much covering by Alex at all.. If anything he wanted to get forward more then Cesc?.. I think he is confused to what his role is? He doesn’t protect the back 4 as he should do and he doesn’t have the passing range to play forward. Gave the ball away to many times in the 2nd half and it just kept coming back when we really needed to keep the ball.

Up front on his own again and worked hard. Scored his goal and on a great run. But at times he needs support and I just wished Wenger would play a man just off him.

came on and got on the ball and passed it well. Also upset a few spurs players which is always nice to see

I really feel sorry for the lad. Came on and was asked to play on the wing AGAIN. He is not a winger and Wenger is killing a decent player but asking him to do a job that he is not best for. STICK HIM UP TOP if you want to see him at his best. Maybe our genius of a manager cant see this?

[Video] Dalglish tells Wenger to f@#k Off
[Ratings] Wenger do the right thing and walk away.. NOW!