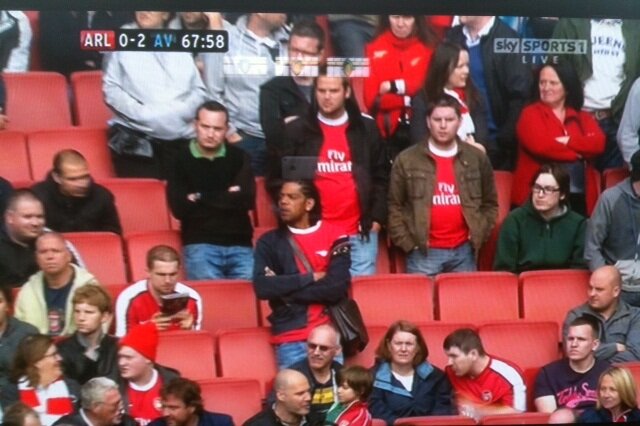 Our worst home record in the league for 14 years!! And Arsenal are going to put up the prices of season tickets by 6%.. “You’re having a laugh”

60.015 apparently in the stadium today, that’s funny because I have never seen so many empty seats at an Arsenal game.

The fans have spoken, the empty seats, the singing of 6% you’re having a laugh, and the stadium was half empty as the players walked around the pitch for the end of season walk of shame.

Will anything change in the summer?… No, Wenger has already said that he is NOT going to make major changes. Pat Rice is now staying but no disrespect to the man but I had hoped that he would leave and a fresh number 2 came in.. .Maybe somebody would would tell Wenger that this 4-5-1 was not working and to stop playing Bendtner on the wing.

Its going to be a long summer. I can see Cesc and Nasri both leaving. I can see a few players from Arshavin, Clichy, Rosicky and Bendtner also leaving.. And a few unknown French players joining us. Forget the likes of Benzema or Hazard coming to Arsenal. Do you really think Wenger is going to spend the money?

Wenger has already warned the fans that there is no guarantee of a top four finish next season.. Well if you feel that Arsene why not do something about it or even better.. QUIT and let a new manager with fresh ideas take over?

But of course Wenger wont get sacked or quit.. a £6m a year contract and a board happy that the manager never spends is the dreamteam at Arsenal.

The fans?… Sod them, they dont need to see new signings or trophies. Lets reward them with a 6% increase in tickets…In Arsene we trust? The fans who support Wenger are more to blame then any player.

Sagna 5.0 ( Again he stepped up and didnt go with his man for the 2nd goal. Just like Lennon and Pennant recently )

Squillaci 4.5 ( He is the new Silvestre, Cygan and Senderos )

Vermaelen 7.0 ( Great to see him back. You could tell he was rusty but went into everything with 100% )

Gibbs 5.5 ( If Clichy leaves we need to sign a new LB. He is not even close to being ready)

Song 4.5 ( Passing was all over the place, Moved to CB in the 2nd half and almost gifted Bent a 3rd )

Wilshere 7.0 ( Good passing but wants to walk the ball into the net. Why not test the keeper Jack?)

Ramsey 6.5 ( Kept the ball well and should of been awarded a pen when he bursted into the box )

Walcott 5.5 ( Put in a few dangeros balls but overal poor )

Van Persie 7.5 ( Scored again, wasted a very chances and towards the end looked very upset with himself )

Subs
Chamakh 6.5 ( Came on did his best but thats just not good enough )
Bendtner 5.0 ( Poor geezer, Came on yet again and was asked to play on the left wing? WHY) …Whats wrong with 4/4/2 Arsene?