Hill-Wood,Kroenke & Gazidis OUT. Usmonov & Dein IN 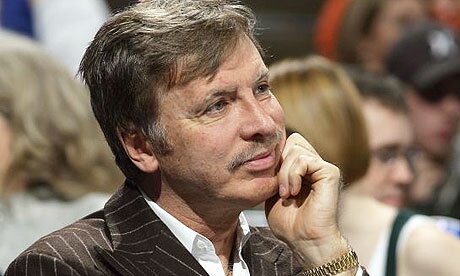 Arsenal FC needs change, from top to bottom we have major problems at our club.

I know that some of you are going to disagree about this but if you look at a few facts I think you will start to see were I’m coming from.

Our current board with Peter Hill-Wood, Stan Kroenke and Ivan Gazidis are nothing more then pathetic clueless clowns who have taken this club to an all time low.

They are telling the fans that we are running a risk free “self-sustaining business model” so they dont put the future of the club in danger. But they are blind to the fact that success on the pitch will result in benefits off the pitch.

For years we have sold off our best players and that money has vanished into a black hole.

Hill wood recently said that “Our transfer policy is to give the manager a budget which includes the ability to use all the money from player sales.

Of course this isn’t the case as we sell players for £25m and replace them with a player worth £3m…£70m in profit this year. What happened to the money from sales of Adebayor and Toure even before that?

The way Gazids and the board have overlooked this summers transfer dealings is nothing more then just small time and embarrassing.

We all knew that Cesc and Nasri would be sold! Why wait till the last wks of the transfer window and into the start of the season to allow them to leave?.. Oh yes thats right so we could make a few more £m out of the deal. But what that Homer Simpson looking bog eyed twat failed to see is that we are now going to have to spend MORE on replacements. Now everybody knows we have money to spend and are desperate so the prices have gone up.

And with 3 days to go there are no sign of replacements for Cesc or Nasri, or Clichy.

Notice I used the word “replacements” .. Not strengthening! We haven’t been good enough for a number of years. We haven’t gone out and strengthened the team for years. All Wenger and the board have done is sold high and replaced them with cheap unknown players to paper over the cracks.

Who was the last player we signed that sent out a real statement of intent and pleased the fans?

We have been lied to for years. We have been told that the reason we moved from Highbury was to allow the team to be able to compete with the elite and will also give the manager the funds to be able to go out and sign the best players in the world… What a load of bullshit that was!

So why are we selling our best players to our rivals and making them stronger?

Stan Kroenke is just pointless. what has he done since investing into the club? Nothing apart from overlooking the sale of our 2 best players this summer and the increase of tickets so we now pay the highest in Europe.

With all this in mind we need change at Arsenal and its now time for Alisher Usmanov and David Dein to be allowed to try and save this club.

Lets face it it cant get any worst.

A word on our manager Mr Arsene Wenger! He is NOT totally blameless in all of this. For years he has said things like, this is the greatest bunch of players I have ever had. And I will only sign players if they are better then what we have. Screw me Arsene but we haven’t won anything since 2006. Wake up and smell your own bullshit. The board have said you have money to spend. go out and spend it on players we need like Gary Cahill and stop faffing around on a penny pinching mission and players from French who like Chamakh take time to settle “if” at all.

People have said that Wenger is covering for the board and doesn’t have the money to spend. Well if that is the case then I’m sorry I have no respect for the man and he should do the right thing and resign. But hang on he is on £6m and year and rewarded for making a profit. Why would a manager motived by money do that…Arsene knowns that his job is safe and will never be sacked and thats the heart of all our problems.

But its not just about the lack of spending that pisses me off about Wenger, Look at the tactics? 4-5-1 and we lose 8-2. He wont change and cant because he is blind to the truth.

Over the next few days I’m sure you will see a few signings. But not whats needed and certainly you wont see ALL the money reinvested into the team. You will see a few cheap panic signings and thats it…. More lies, Wenger hinted at Benzema! We dreamed of signing Mata, Kaka, and Hazard. And will will end up with the Korean Pele who looks world class on youtube but isn’t any better then Vela, Bendtner or Chamakh…. We have defensive problems and whats Arsene doing? Signing a Korean striker… The man is just a genius.

And now a word for the AKB who for years have shouted us down and told us to F@k off and support spurs every time we questioned Wenger. Its fans like you who are as much to blame then any player. Your blind support is the reason why Wenger has been allowed to get away with this for so long and the reason we are where we stand today. “in Arsene we trust” “Arsene knows”…”If you dont like it go and support Man City”, “Who is going to replace him” ..”If Arsene leaves the club all our best players like Cesc will leave with him”…

Thats your answer to everything and for years you have shouted us down with crap like this.

Its time that we stood up and united, all the bloggers, people on facebook, twitter and fans from all over the world. We need change and its time we stood up and said so. Spend some f@king money, if you cant then step down and allow other people a chance. [Ratings] WENGER OUT! Only has himself to blame.
Eden Hazard says “NO Thanks” to Arsenal move