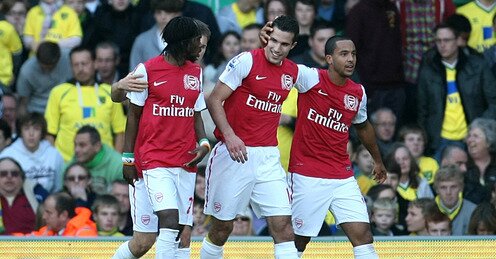 Arsenal continued to climb up the Premier League table as they came from behind to defeat Norwich City 2-1 at Carrow Road on Saturday, thanks to an inspirational performance from captain Robin van Persie.

Steve Morison gave the hosts the lead against the run of play on 16 minutes but Van Persie restored parity 10 minutes later.

Then just before the hour-mark Captain Vantastic found the target yet again to put the Gunners into the lead that they did not relinquish.

Norwich had chances of their own but the margin of defeat could have been bigger for them had Theo Walcott’s shot late in the second half not come off the woodwork.

Szczesny 7.0 (No chance with the goal and came and handle most of the crosses well. Good with his feet also)

Koscielny 6.5 (Played RB and looked defensivly solid. Didnt give us much going forward but allowed Walcott to push forward and not worry about the defensive game)

Vermaelen 8.0 (Great game, Solid at the back and it shows how much we have missed him. Bombed forward and picked out a few great long rang passes)

Mertesacker 5.0 (Right out of the Johan school of defending for the first goal, His mistake gifted Norwich the goal but credit to him he was much better in the 2nd half)

Andre Santos 7.0 (Played very well, Good going forward and picked out some great passes. Also looked much more solid at the back today and good in the air)

Song 7.5 (Won most of the battles in the middle and picked out RVP for the winning goal)

Ramsey 6.5 (Played well and linked up the play well at times)

Arteta 7.0 (Worked hard and won the ball back countless times. Very good all round game)

Walcott, 8.5 (VERY good game, at the heart of everything good going forward. Made the first with a great run and also hit the post. Looks to be on great form)

Gervinho 5.5 (Missed to many chances and its no wonder Alex Song didnt pass to him when given the chance. Looked dangerous at times but he misses easy chances)