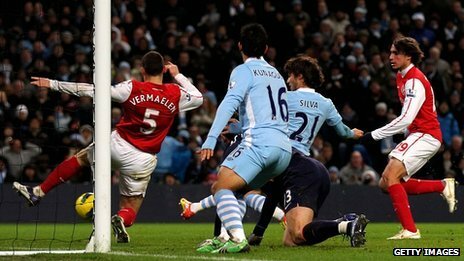 Manchester City returned to the Premier League summit after a brief hiatus as they beat Arsenal in a thrilling game.

Following Manchester United’s lunchtime win over QPR, David Silva pounced after Mario Balotelli’s shot was saved to score the only goal of the game.

Sergio Aguero could have made the win more comfortable but fired over early on, while Pablo Zabaleta hit the post.

Arsenal had a number of chances though, and Joe Hart saved from Gervinho, Theo Walcott and Aaron Ramsey.

Robin van Persie could not find his 20th goal of the season either, as the hosts restored their two-point lead at the top over their city rivals.

Arsenal Ratings:
Szczesny 8.5 , MOTM for Arsenal. Made a number of fine saves.
Vermaelen 8.0 , Pushed forward well and looked our most dangerous player with his long rang shooting.
Mertesacker 7.0 , Looked slow at times but played well before coming off with a knock.
Koscielny 7.5 , Made 1 fantastic run and played well before moving to RB.
Djourou 5.0 , Came off at half time injuried. Made a number of mistakes and hospital passes.
Song 6.5 , Booked early on and now misses the next game.  Clumsy and didnt have a great game.
Arteta 7.0 , Played well and picked out some nice passes. Worked hard for the team.
Ramsey 5.0 , Weak and slow, didnt win any 50/50 battles and wasted our best chance with a poor first touch.
Walcott 6.0 , Tested the keeper with a decent shoot but then taken off and he didnt look happy about it.
Van Persie 6.0 ,  Not his best game, Linked the play well but no support. And without him scoring who else is going to?
Gervinho 5.5 , Wasteful with his final pass.

Subs
Miguel 6.5 , Came on and didnt let us down
Chamakh 5.0 , Pointless
Arshavin 4.0 , Came on and gave the ball away and missed a decent late chance.