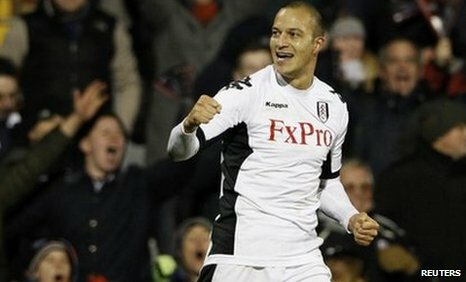 Bobby Zamora scored in the final minute of injury time to help Fulham come from behind to beat 10-man Arsenal.

Arsenal dominated the first 45 minutes, but only had Laurent Koscielny’s header to show for it. But in the 2nd half it was all Fulham and the Gunners didnt even manager a single shot on target.

Its now clear that Wenger has to drop the deadwood.  Players like Almunia,Djourou, Squillaci, Rosicky, Arshavin, Chamakh need to be sold and replaced with fresh blood.

Lets hope that the penny has finally dropped and Wenger makes some signings this transfer window before we finish out of the top 5 and out of the Champions league place.

Hazard, Gotze, Podolski are the players we need.. But knowning Wenger he will go out and sign some 17 year olds or players like Silvestre!

£30m in the bank, Wenger has to now spend… its BUY BUY or BYE BYE Arsene

Arsenal Ratings
Szczesny 6.0 [very good game until he came and flapped for a cross and left his goal empty for Sidwell to score]
Mertesacker 6.5 [ Looked very good in the first half but a few mistakes in the 2nd half and crumbled]
Koscielny 7.5 [Scored our goal and at times looked fantastic]
Djourou 4.0 [ Was Senderos this bad?.. Sent off at 1-0 and then it all went wrong. Booked for a clumsy tackle and then it was only a matter of time before this clown was sent off]
Arteta 6.0 [ First half he played well but didnt get on the ball in the 2nd and the game passed him by]
Walcott 5.0 [His final ball is a joke. If he wants £85k a week he needs to show a hell of alot more then he currently is]
Ramsey 6.0 [Great pass for the goal and in the first half he played well. But not in the game at all in the 2nd and looked weak]
Song 6.5 [Gives away to many freekicks in dangerous area and gave the ball away to many times]
Coquelin 8.0 [ MOTM for me.. The kid played at Left back and didnt let us down]
Van Persie 6.0 [Not in the game at all, needs support]
Gervinho 4.5 [ Missed 2 early chances and his final ball was just as bad as Walcott. Really starting to worry me how many chances he misses.. Very poor tonight]