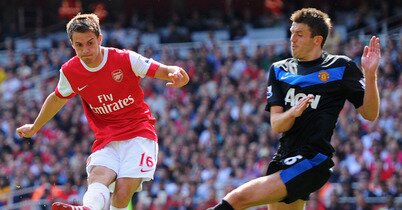 You can’t underestimate the importance of Aaron Ramsey in this Arsenal squad, he has been integral to Arsenal’s progress in the last few seasons, especially last year when his extra time goal in the FA Cup final ended Arsenal’s nine year long wait for silverware.

“Hopefully we can win the FA Cup this year. Then that’ll be two things in two years so hopefully we can just keep that run of winning things going,” Ramsey said.

“Back-to-back finals are not an easy thing to achieve. In the second half of the season we have shown the form that we need throughout the season to win this league.

“We certainly showed that we are capable of going on these big runs and not losing too many games.

“If we can just show that consistency throughout the season then we’ll be challenging for the Premier League, and that’s what we’ll be looking to do next year.”

Ramsey knows they must perform and not be beaten by the occasion.

“It’s so important to have that hunger and determination to go out and prove that you’re worthy winners,” he said.

“It’s not going to be an easy game, we’re going to have to be aware of that, but all the lads are even more hungry to win something this time around.

“We want that feeling that we had last year and we want to go on and win more things.”

Ramsey completed a spirited fight back last year as the North London club found themselves 2-0 down in the first eight minutes.

“I was thankful in a way that they did score their two goals early on in the game and that we did have a large chunk of the game to get back into it,” he said.

“That gave us the kick that we needed to get going. We managed to score before half-time and then it felt like we were in control of the game and created a few opportunities to get back into it.

“We managed to do that and to win in extra-time was amazing.

“To score a winner in the FA Cup final, it’s everybody’s dream and I managed to live it.

The 24 year old hopes that Arsenal can repeat the euphoria of last year without the poor start this season.

He said: “We never do it easy. We’ve experienced what it’s like now, going a few goals behind early in the game, but we still believed in ourselves and our ability to get through it.

“Hopefully it will be a bit easier this time and we won’t have to put so many people through that.

“Villa are a good team, very solid and of late they’ve been in really good form, so we’ll have to be aware of that.”

Ramsey did not want to buy into the rumours linking him withBarcelona, who are reportedly weighing up a bid for the Welshman when their transfer embargo is lifted

“That’s just something that’s been written in the papers,” he said.

“I’m focused on Arsenal and winning the FA Cup. That sort of news doesn’t affect me or even enter my mind.”

Ramsey is expected to play a key role tomorrow as Arsenal will set a record of playing their 19th FA Cup final.

Related ItemsAaron RamseyArsenal
← Previous Story The importance of Francis Coquelin
Next Story → Walcott : “Premier League next target for us”