Media Bias: Beauty against the Beast 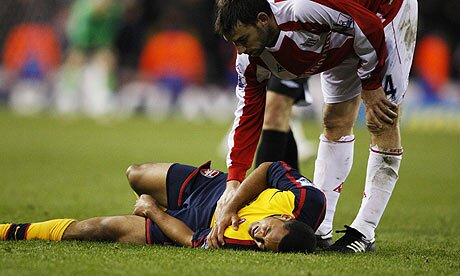 If you read the football news aftermath of the World Cup final between Netherland and Spain, you will find a common theme among the English media; dirty, cheating Dutch.

Steven Howard (chief football editor) of the Sun newspaper has called Dutch shameless, moaners, and suggested they should join the football hall of shame. Howard also tagged the Dutch coach Van Marwijk as mean-spirited and bad-tempered for his world cup tactics. Michael Calvin from Mirrorfootball has said mid-field hardman van Bommel is the most repugnant footballer on the planet and he hopes Howard sends him off in the final. He branded Bommel cruel, cold, conman for whom bile is as ­nourishing as breast milk, that he goads, and intimidates the opponents.

Sports Mail asked the question: is it EVER acceptable to play like Holland did against Spain? It also suggested that Holland was cynical and persistently foul played against Spain in Sunday’s World Cup Final. Jamie Redknapp in the same column said it’s never acceptable to kick opponents off the park, as Holland did. Matt Lawton of Sports Mail said the Dutch had betrayed their own football culture with an approach built on brutality and intimidation against a marvellous Spanish team then chose to blame everyone but themselves for their defeat in Sunday’s World Cup final. He added a lack of class off the pitch as well as on it, rather disappointingly and branded Dutch brutal, beaten and bleating.

Of course pundits from BBC and ITV have also joined in with the slaying of Dutch before and after the game.

Graham Poll called Dutch players bully-boys, villains and then defended Howard Webb for his poor display at the greatest football match in the world. Webb to referee the final was indeed FIFA’s compensation to England for Lampard’s disallowed goal and it was clear that he couldn’t control the game properly.

Now, many of you may feel Dutch deserves all of it. The media slayings, and the cards branded in the game. And I agree. They played anti-football after all. They stifled and battled Spain’s beautiful, attacking football, to the extreme limits in the final.

But have any of you seen such tactics used by Dutch somewhere else, closer to home and probably in more successful ways? Nope, not Inter Milan against Barcelona. It is in Premiere League week in week out when Arsenal plays their brand of beautiful football in the most physical league in the world, especially in their away games.

Bolton (under Allardyce), Blackburn, Stoke City, Hull City, and Birmingham city etc all play the same football Dutch has played in the world cup final, against Arsenal. Their managers and fans constantly and publicly argue that Arsenal has better quality players and it is the only way to stop Arsenal and to be competitive against them.

Bolton and Stoke players have openly declared in the media times and again last season that they will rough up and stifle Arsenal and make the Gunners squeal. Sam Allardyce proudly admitted targeting Fabianski, and his players pushed, blocked and pulled Fabianski from getting the ball in dead ball situations. They have never really intended to play the ball. Many premier league defenders have broken Arsenal players’ legs to pieces and shattered careers of talented players like Eduardo’s. Eduardo almost lost his leg. Diaby has suffered the same faith but resurrected his career and fingers crossed Ramsey will do the same. Theo Walcott was cut through like butter under hot knife in most of the games he’s played.

Just as Spain suffered bruises and sprains against Holland, Arsenal has suffered the same treatment games after games. It cannot be said that Arsenal are the most fouled club in premier league but they indeed play the beautiful clean passing game topping the fair play table last season, just as Spain won the fair play trophy for the World Cup. Arsenal are also second top in least numbers of yellow and red cards shown last season.

Many premier league managers have adopted this physical approach to play against more fluid and flare Arsenal. Arsenal had no nonsense players such as Patrick Vieira, and Tony Adams who are not afraid to put the foot in the tackle in the past, but Arsenal has never approached a game with a plan to kick the opponents out of the park like Dutch or say Blackburn.

The interesting thing is, all these media outlets who have unequivocally condemned Dutch for playing such tactics against beautiful Spain have lauded the premier league players and clubs using the exact same tactics against Arsenal for many seasons. BBC’s MOTD pundits have mentioned how Arsenal players do not like it in their face, when they were tackled hard and rough. They have justified and promoted this approach and the outcome was diabolical for Arsenal and its players. Although MOTD has now stopped promoting it after Shawcross broke Ramsey’s leg, the effect was there for all to see. BBC football and the print media have defended Ryan Shawcross as an innocent player and praised his humility when he cried after seeing Ramsey’s shattered leg. After all, it was an accident, they argued.

When United and Chelsea kicked Arsenal players out of the park, it was printed in the newspapers that Arsenal players were boys playing against men. They have praised Darren Fletcher for his physical approach against Arsenal. Fletcher was nothing less than Van Bommel in the tackles.

The media outlets have a phrase coined for those tackles used by Dutch in World Cup: “a robust challenge” but they use it only for premier league clubs and defenders. They lauded it as English way of playing football. Physical, fast, tough and robust. They don’t care for the opposite player as long as they “got the ball” and argued these players have “no intent” to hurt the oppositions. They just want to remind the Arsenal players of “their presence”, not just one game, but game after game through out the season.

Now, Dutch are the villains, disgraces and anti-football. How biased and two faced the English Media is. We have known for a long time that when foreigners dive in the games, they are crucified and made target practices. When English players dive though, it was put under the carpet and you will never hear it again. It was too common that people accept it as normal in the media.

But the crucifixion of Dutch in the world cup by English media has re-opened the case of tough tackling and rough challenges to stop more skilful opponents playing the beautiful football.

Debate this more on the forum www.arsenalaction.com/forum/