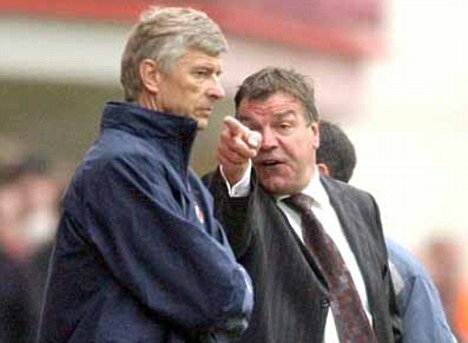 Arsenal fans know for a long time that Blackburn and Sam Allardyce use foul plays to score against oppositions in Premier League. Allardyce’s players target goalkeepers unfairly and there are video evidences of this on more than one occasion within a few months time.

Arsenal lost to Blackburn 2-1 in the first week of May 2010 last season. During one of the two goals scored by Blackburn, Fabianski had been deliberately blocked and pushed by Blackburn players. It is true that Fabianski did not assert himself strongly in the built up but the foul on him was blatant enough although the referee and the media did not agree.

One media source reported that “Blackburn are within the rules and had an uncanny knack of succeeding against the current Arsenal side, who have a tendency to wilt under physical pressure.”

Allardyce has come out and admitted that he has targeted Fabianski. He said: “If you expose the opposition’s weaknesses enough then eventually those weaknesses will be exposed, and the amount of balls we put into the box on the keeper, who has obviously been a weak link for Arsenal recently, was our main tactic. And that paid off because we’ve beaten Arsenal fair and square. The referee didn’t see them as fouls. I’m not concerned about what Arsene says. He’s said it before about my tactics but we know these tactics work against Arsenal and they worked well again today.”

In fact, the problem was not the amount of balls sent into the box like Allardyce tried to portrait. It was the unfair blocks, pushes, body checks and the physical challenges on the keeper.

On the winning goal by Blackburn, both Samba and David Dunn can be clearly seen pushing backward against Sol Campbell just in front of Fabianski and at the time Samba hit the ball with his head, David Dunn was clearly blocking Fabianski and then pushing, bundling him down into the Arsenal net. David Dunn almost stepped on helpless Fabianski on the floor inside the net. Normally players will be physical and many of them in the box grabbing each other during a corner (or) a free kick are normal but targeting a keeper intentionally is only done by a few teams. This is a routine tactic for Blackburn but the referee, commentators and the media thought nothing was wrong with that.

However, in the game against Fulham last weekend, Blackburn used the exact same tactic of unfairly targeting goalkeepers, only more blatantly on a more experienced goalkeeper Mark Schwarzer. Not just once, more than two occasions in a single game including getting a goal, there were fouls, body checkings and pushings on the keeper. The incidents were discussed in BBC’s MOTD but there were no major follow ups in the media although Ian Wright in the Sun did question Allardyce’s claim regarding his calibre on coaching top European teams like Real Madrid, Inter Milan and his team’s deliberate foul plays. Allardyce hit back using a north-south divide by saying “A lot of Southern-based columnists never even watch Blackburn play so what they say doesn’t really bother me.” He asked: “Has nobody ever fouled a goalkeeper before?” before adding: “The blame lies, not with El-Hadji Diouf, but with the referee.”

Arsene Wenger has been vocal about teams unfairly targeting his goalkeepers but this has been overshadowed by under-performing goalkeepers like Fabianski. When people see the goals, they normally blame the keeper and the goal as a blunder. “The keeper should have done better” is a usual line. It is true Fabianski does flap and he should have done much better but in the away game against Blackburn last season, the foul on him was not picked up by the officials and it was unfair on the poor bloke.

On those fouls on experienced, world cup Aussie keeper Mark Schwarzer, MOTD blamed El-Hadji Diouf. But the ultimate responsibility must go to Allardyce and the Blackburn team, not Diouf alone. Diouf has a reputation but he was only following team orders and the usual tactics. Allardyce is using Diouf’s notorious characteristics to his team’s advantage in a bad way. There are many compelling evidences that the Blackburn players have been instructed to target the opposition players, and to make unfair physical challenges on goalkeepers to score in numerous occasions. If the Premier League officials pick up these evidences and act upon them in the coming games is another matter.

Wenger’s goalkeeping insanity goes on and on….
[Photo] The “BIG” Defender Arsenal fans have been waiting for!!!!