Who is the best man to replace Pat Rice at the end of the season? 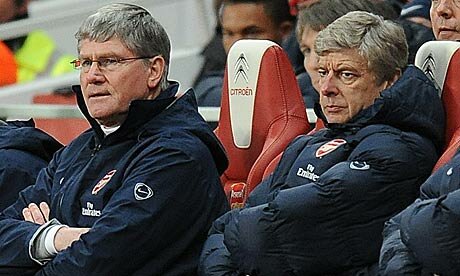 Assuming the below story is true of course?…Personally I think a change to the backroom coaching staff is just what we need. A new number 2 to bring in some new ideas and made toughen up our defence.

I would love to see Keown or Adams come back so that he can we work with the defence as well as change their attitude to how he was i.e. You will not beat us, over my dead body old school defending.

Arsenal assistant boss Pat Rice is set to retire at the end of the season, according to The News of the World.

The right-back – born in Belfast but brought up in Islington, a stone’s throw from Arsenal’s former Highbury home – also won 49 caps for Northern Ireland.

After his retirement from playing in 1984, Rice took up an appointment as Arsenal youth team coach and remained in that position for 12 years.

But after the resignation of caretaker boss Stewart Houston – who was in temporary charge as manager following the sacking of Bruce Rioch – Rice filled in as the caretaker and achieved three straight victories in his three games at the helm, giving him a 100% win record unique among Arsenal managers.

After the appointment of Arsene Wenger, he took up the assistant managerial role alongside the Frenchman. It is the position he still holds.

Former Arsenal centre-back Steve Bould, who has impressed as the club’s Under-18 Academy coach, and reserve team manager Neil Banfield, are both believed to be potential candidates to fill the vacancy when Rice retires.

It is thought that Bould, who with Lee Dixon, Tony Adams and Nigel Winterburn comprised the legendary Arsenal back four assembled by previous manager George Graham, could offer Wenger particular expertise in the defensive area of the team.

Who would you like to see? Debate this more on our forum –www.arsenalaction.com/forum/