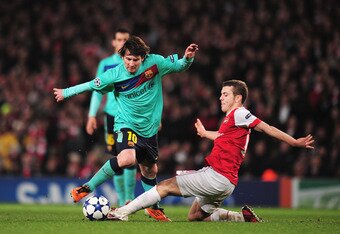 Up against the Barcelona masters and world cup winners of Xavi, Iniesta and Busquets, Wilshere played with a maturity that belied his 19 years.

Strong in the tackle, Wishere displayed remarkable composure despite the intense pressure imposed by Barcelona high up the pitch. He showed remarkable bravery for a teenager in such a game, always demanding the ball, receiving it in tight spots with multiple players around him, yet moving it so Arsenal could attack.

His movement of the ball also provided an example of somebody who instinctively knows the right pass to pick, whether it’s a short or long ball. At such a young age, this is some skill, and Wilshere’s improvement has been nothing short of remarkable.

His tactical knowledge was also something to behold. Defensively disciplined alongside Alex Song, and later, Samir Nasri, Wilshere also knew when to make forward surges, often seeing the space quicker than those he was competing with. That’s no mean feat considering the opposition and how they suffocate such space.

One such surge in the first half should have provided an equalizer, but Robin Van Persie didn’t make the most of Wilshere’s inch-perfect pass.

His pass completion rate was 94%, and his ball to Fabregas which began the move for Arsenal’s winner displayed his vision and talent. Taking four players out of the game with one pass, he helped set Arsenal on their way to a famous night.

The physical and mental strength of Wilshere cannot be underestimated. Barcelona had 69% of the possession last night. This requires conditioning of a superhuman nature. Chasing the ball for long periods can be exausting both physically and mentally.

But Wilshere lasted the whole game, and if anything, showed a clarity of thinking late with and without the ball that could embarrass the most seasoned of campaigners.

At 19, he still has much to learn, but if Wilshere continues to work hard, there is no reason he won’t be able to fill any Fabregas-shaped void that may arise in future years.

Enjoy this Video of Jack vs Barca
httpv://www.youtube.com/watch?v=9W8Ie4MyRX0